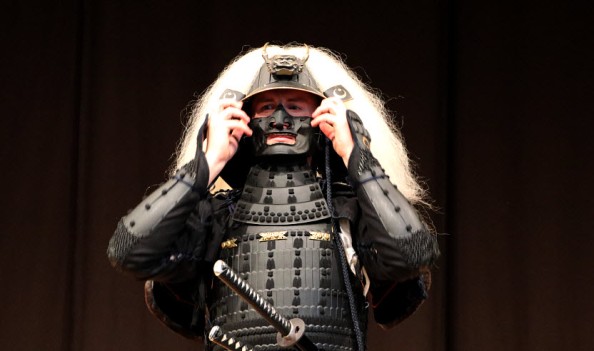 The exhibition of extraordinary Samurai armour at Kunsthalle Munich runs very well and is a huge success. Around the exhibition there are many different events taking place to attract visitors and aficionados alike. One such event was held on May 7, 2019.

It was a lecture about the topic of fighting methods in full Yoroi (armour) held by Ōtsuka Ryūnosuke, the seventh Sōke of Hokushin Ittō-Ryū Hyōhō. Ōtsuka-sōke is currently a consultant and advisor to the Kunsthalle Munich and is also guiding visitors through the exhibition regularly.

This specific lecture wasn’t done at the Kunsthalle Munich itself but in the “Museum Fünf Kontinente” (Museum Five Continents). Both museums have a close collaboration.

The big auditory was set up to accommodate around 300 guests. At the start of the lecture it was completely packed with people, many could not even get a seat anymore! Certainly, the interest was there.

Ōtsuka Ryūnosuke doesn’t like dry speeches and therefore encouraged the audience from the beginning to step in with questions whenever they like. Throughout the evening a lot of questions were asked… and answered to the utmost satisfaction!

Dressed in a full suit of armour (see picture above), Ōtsuka-sōke started with an explanation about the specifics of early warfare in the Heian era (794 – 1185) and how the bow was the battlefield weapon par excellence and not the famous Japanese sword, which came to prominence as a major fighting weapon only centuries later.

Now, Ōtsuka Ryūnosuke went further down the path of history touching on the development and use of pole weapons on the battlefield such as Naginata and Yari and the change in armour design triggered by this. Also the arrival of the first Europeans in Japan, the introduction of powerful firearms to the Japanese battlefields and another round of design change for the Japanese Yoroi was addressed in detail. This was always combined with references to the exhibition where of course many such pieces can be seen.

All the strong and weak points and all parts of a Japanese armour have been explained in a very detailed manner, which the audience obviously liked a lot. 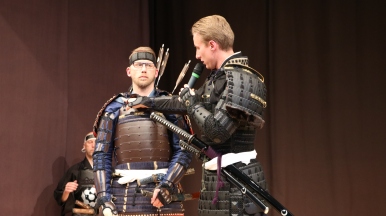 As the lecture turned into the 19th century many alterations to the way the armour was used have been discussed: No major battlefield campaigns with thousands of warriors are prevalent now but small scale skirmishes, ambushes and guerilla tactics. Also specialized police units are patrolling the cities. For this, full Yoroi would have been quite a hindrance and usually only armour parts or chainmail under civilian garments where used.
Even lacquered bamboo chest protectors (Dō), as used in the fencing halls of the most famous sword-fighting schools, have been worn by armed patrols.

In order to give the audience a feeling how this have looked and been used, Lyutov Dmitry-Sensei from the Hombu-Dōjō and myself as Swiss representative of Hokushin Ittō-Ryū Hyōhō where performing an Enbu of the first two kata of our tradition (of course with live blades). 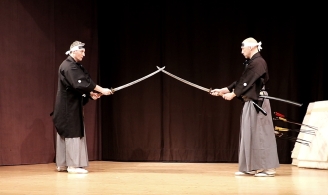 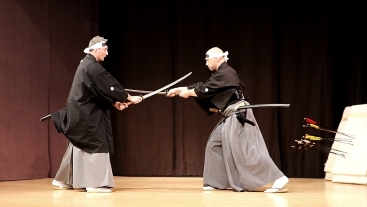 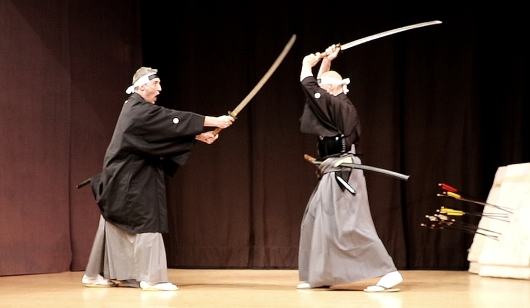 After that, Ōtsuka-sōke and Olah Tamas-Sensei demonstrated the same kata in full armour to show the audience how techniques and tactics, done correctly, are applicable for use in civilian clothes as well as for Yoroi. 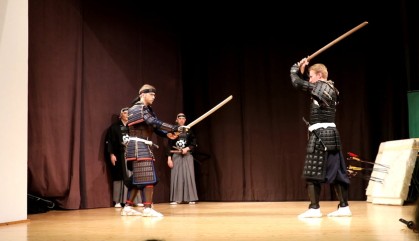 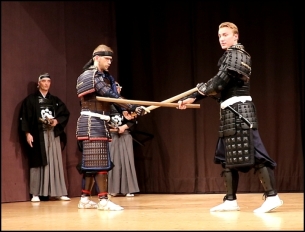 After the lecture was concluded it wasn’t closing time yet… For another 30 minutes people surrounded us with many more questions!

I would like to mention the respect and consideration of all the onlookers. No touching of gear and weapons, no nasty comments… just a lot of sincere interest! Overall it was a very profound lecture and great experience to show and explain so many people the world of classical Japanese warfare culture.