My name is Martin Stehli-Ono

My interest in Japan and its (martial) arts was triggered from an early age on. So I’ve spent my teenage years practicing modern japanese martial arts. Later, I was looking for a more sword-based art. Thankfully, I could find a very good teacher in my native region who belonged to the Ishido line of ZNKR Iaidō. So I started with Seitei-Iai, Muso Shinden-Ryū and later Tamiya-Ryū as well.

Around the same time I’ve developed a strong interest  for japanese art swords (bijutsu tōken) and joined the NBTHK. My first travels to Japan followed.

In my mid 20’s I have decided to move to Japan for language studies. Actually, the plan was a one-year sabbatical there. Well, this developed into a stay stretching over several years including advanced language studies, employment with a japanese company and marriage.
Of course, I have followed up on Iai as well and trained (among others) under Ishido-sensei in Kanagawa. But I do not consider myself a student of Ishido-sensei as the term „student“ has a much deeper meaning in a japanese context. Nevertheless, I received many valuable lessons in this time.

Later, I moved back to Switzerland and took up again training in modern Iai, but with another school (Musō Jikiden Eishin-Ryū).

Furthermore, I focus on the study of „martial culture“. This means try to understand classical japanese Koryū in their holistic function (their sociological, political and „religious“ aspects). My main area of interest is the Bakumatsu period, which I consider one of the most exciting (and ambivalent) periods in japanese history. I am a member of the bunbu-Forschungskreis (research group) which is concerned with the theory, practice and philosophy of japanese martial arts and arts of warfare. A first anthology was published in 2017 (in german), including an article by myself: Studien zur Kampfkunst in Japan (Bunbu Kenkyu, Band 1) 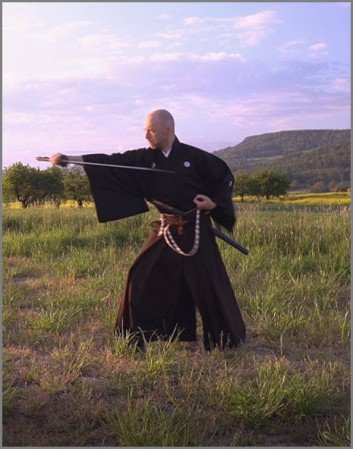 A few years ago I had the opportunity to join a genuine Koryū. This is the Hokushin Ittō-Ryū Hyōhō which has its hombu dōjō (Chiba-Dōjō) now in Munich, Germany under the 7th Sōke Ōtsuka Ryūnosuke Masatomo.

I gave up modern Iaidō practice completely in order to devote myself fully to the study of Hokushin Ittō-Ryū swordsmanship.

As Shibuchō (branch chief) I am responsible for the swiss Shibu of the Hokushin Ittō-Ryū Hyōhō and leading the Keikojō in Basel as Kaichō (director).
In January 2015 I have received the Hatsumokuroku scroll from the 6th Sōke Ōtsuka Yōichirō Masanori.
In April 2017 I have received the Kajō-Mokuroku scroll from the 7th Sōke Ōtsuka Ryūnosuke Masatomo, the third of a total of five Makimono in our tradition.

Basically, this blog is in German as there is a clear lack of valid information concerning Koryū in this language and I hope to fill this gap just a bit with my work. Upon popular demand certain articles are translated into English as well.