A short statement beforehand: It’s a real pleasure to see how the student base  became stronger and bigger in the past few years! Especially in reference to the fact that the school got a good foothold in different european countries. But more about that later.

These festivities needed a good deal of some months of preparation and to coordinate and invite the senior and high-ranking guests. Here I would like to give thanks to Ôtsuka Ryûnosuke Masatomo-sensei und especially to his wife Ôtsuka Tomomi-san. ほんと にありがと ございました!

As I was delegated to act as the evenings announcer, I’ve translated the speech into englisch and german.

Afterwards, Saikô-Shihan Ôtsuka Ryûnosuke Masatomo held as well a short speech in which he was thankful for the big support he received of so many people.

Now the first guest of honour of the evening, Yanagi Hidenao-sama, the consul general of Japan, held his formal oration.  He complimented Ôtsuka Ryûnosuke Masatomo-sensei on such a wonderful Dôjô and he stressed the international cultural exchange which is given through the fostering and practice of a japanese cultural heritage like the Hokushin Ittô-ryû Hyôhô.

It was time now for the Kagami-Biraki ceremony. This is held for example on the opening day of a Dôjô. Therefore a big Sake cask will be broken open together. This was done by Sôke, Saikô-Shihan, the consul general and the three Dôkôkai-Kaichô. 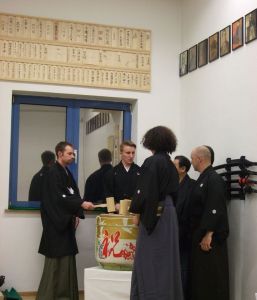 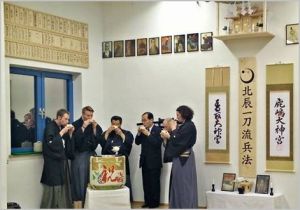 Other guests of honour were Paul Masters-sensei and his two sons Lee Masters-sensei and Anthony Masters-sensei. They demonstrated Tenjin Shin’yo-ryû, a classical Jûjutsu-ryûha. This is as well a school from the Bakumatsu era and it’s founder was a close friend of Chiba Shûsaku Narimasa. There was a deep school friendship between both schools which will be again picked up and continued. The Enbu was very impressive and a clear evidence that this school was counted as one of the toughest and most influential ones in its time.

Next in line was the Enbu of the host school.

After that much action it was time for a more tranquil point. Ohara-sensei of the Mushakoji-senke tea school  performed a so called “Kencha” ceremony. Here, tea was prepared for the gods of the Dôjô and it was offered by Ôtsuka-sôke. 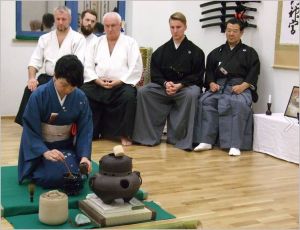 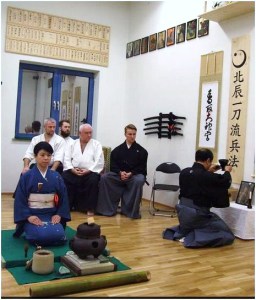 The official part came to an end and all guests were offered Sake by the three Kaichô (Ball Markus, Albrecht Sven and yours truly)!
Then the grand buffet was opened and the guests were free to serve themselves with delicious food and plenty of drinks. 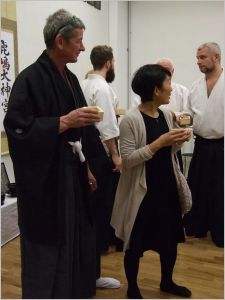 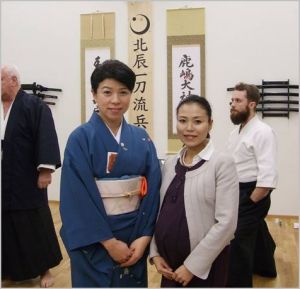 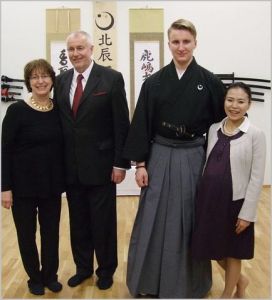 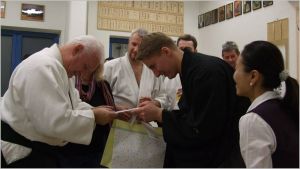 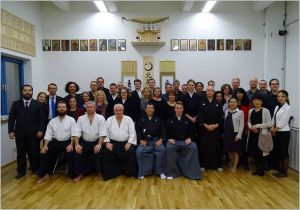 Furthermore, especially for this occasion a 32 page glossy magazine was produced in which the detailed history of the school and its philosophical background is explained and famous swordsmen of the Hokushin Ittô-ryû are discussed as well. This magazine was a big hit with the guests! 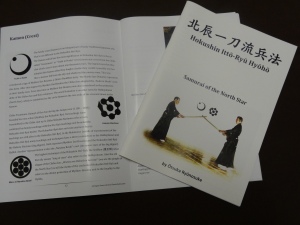 On the following day (January 10th, 2015) the two-day winter seminar of the Hokushin Ittô-ryû Hyôhô started. Given the big attendance the seminar was held in the modern sports gym of the Japanese School Munich.

The participants were mostly already member of the school but there have been a few “externals” attending as well. For example a representative of the Hontai Yoshin-ryû and a US citizen currently study in Europe.

As usual with our school the training began with a lot of Ashiwaza-geiko (footwork training). In order to wield a sword properly this is of utmost importance. Afterwards bokutô was taken up and more Ashiwaza-geiko followed! Next was Suburi on the plan. A lot of Suburi!

Now it was time for a quick break. The feedback from the “externals” as well as from very new students was insightful: We do a hard and demanding training but everyone enjoyed it tremendously!

For Sven Albrecht, the Kaichô of the Dôkôkai Osnabrück, and myself came now exam preparation which was supervised by Ôtsuka-sôke and Saikô-Shihan alternately.

The session was closed at 19:00 and most of us set off to the Chiba-Dôjô in order to cater ourselves. There was still plenty of food and drinks left over from last nights party! We all sat together, served us from the big Sake cask, chatted and occasionally taking a Naginata, a Bokutô or a Shinai from the stand…
Ôtsuka-sôke was firm in his belief to show a lady participant the finer points of our schools Naginatajutsu!
That’s the way it should be!

The Sunday training went off in a similar fashion as on Saturday. In the early afternoon was the Hatsu-Mokuroku exam of Sven and myself.

As we passed, there are now three Shidôin. Markus Ball, the Kaichô of the Dôkôkai Bonn already received his Hatsu-Mokuroku last year. The three of us were ordered now to supervise the Battôjutsu training.

At the end of the day there was as well two Kirigami exams, which where passed with flying colours.

In conclusion of the seminar the Kirigami and the Hatsu-Mokuroku scrolls haven been awarded. Sôke as well as Saikô-Shihan have been very pleased with the big improvements by all participants of the seminar. Ôtsuka-sôke presented as well some gifts for extraordinary performance in the seminar. A member of the Dôkôkai Basel for example received a Kodachi-Shinken and was very happy as you can imagine!

This is the Hatsu-Mokuroku scroll which was handed to me by Ôtsuka-sôke. The content is solely meant for the recipient. 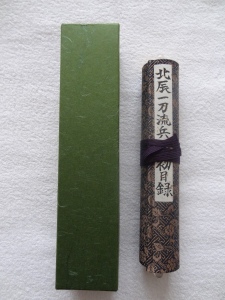 As mentioned before, there were also issued two new Dôkôkai-Menjô. These are permits which Ôtsuka Ryûnosuke Masatomo-sensei grants in order to open and lead a Dôkôkai which is directly linked to the Chiba-Dôjô Munich.
There are now new training sites for Hokushin Ittô-ryû Hyôhô in Braga (Portugal) and in Budapest (Hungary)!
Braga is led by Eduardo Brito (Kirigami) and Budapest is led by Tamás Oláh (Kirigami).

After two days of highly intensive training everyone was tired but also extremely happy! 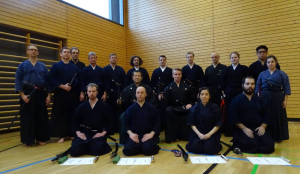 On Monday morning there was again a five hour training session in the Chiba-Dôjô Munich itself, led by Sôke and Saikô-Shihan. This was not part of the seminar and therefore only four people participated, three Dôkôkai-Kaichô and one student from the Dôkôkai Basel. Basically, this was a special training for the Kaichô where they received further instructions from Ôtsuka-sôke concerning training methodology and didactics.
Notably, the Hokushin Ittô-ryû have a lot of profound approaches in order to ensure a successful tuition. Successful means here to bring the student in the best possible manner to a quick increased efficiency. Only this can be the goal of a sword school. Obviously, I can’t go into the teaching details here.

Now it was time to grab the bogu and start with…. Gekiken! As you might know, our school is one of the very few were this is a mandatory part of the curriculum. For example, if one wants to pass the exam for the Hatsu-Mokuroku it’s inevitable to be tested in Gekiken by Saikô-Shihan on one’s own fighting capability. In addition, there are certain tactics who fit in smoothly into the other areas such as Kumitachi and Battôjutsu.

First, we practiced the Gogyô-no-kata in Bogu. But in a fashion that both, Shidachi and Uchidachi, were looking for openings in the opponents guard in order to attack instantly. All of this still in the context of the Gogyô-no-kata.

Later, free Gekiken sparring followed with different pairings, so that everyone had to fight anyone. In the Hokushin Ittô-ryû we have free choice of weapons and therefore we fought sword vs. sword, sword vs. naginata and naginata vs. naginata. Naginata vs. naginata was only for Sven Albrecht and myself, the new Shidôin and recipients of the Hatsu-Mokuroku. 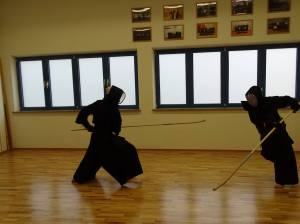 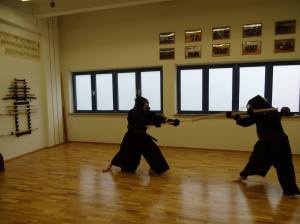 On these two pictures you can see Sven on the left and myself on the right.

Ôtsuka-sôke stayed for the rest of the week in Munich and was teaching together with Saikô-Shihan daily from morning till evening so that some students could benefit a lot. For me and my student it was time to return to Switzerland.

I believe I speak in the name of all participants when I again say a big thank you to Ôtsuka Yôichirô Masanori, the 6th Sôke of the Hokushin Ittô-ryû Hyôhô, for his generosity. Consider as well that he comes to Europe several times a year!
Also the leader and owner of the Chiba-Dôjô Muncich, Ôtsuka Ryûnosuke Masatomo-sensei deserves a big „thank you“ for giving us all the possibility to train in such a wonderful place and for planning the Dôjô-Biraki and the winter seminar.